A sense of a week, a sense of community: When our writing group moved online 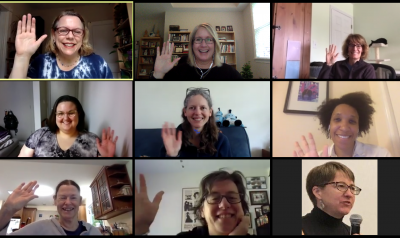 I have been attending Faculty Write writing groups for years now, either as a participant or as a convener. I look forward to them every single time. Though I consider myself an introvert, I have come to realize that I need to feel that I am working in a community that will sustain me and my efforts. And that is what I have felt from the very beginning with the writing groups: unqualified support, a non-judgmental atmosphere, and marking off an occasion to focus on one task. It is one of the things I miss the most about growing up on a farm with a large family: we would all work as hard as we could on the pressing project, pulling together, each contributing in our own way, usually without a lot of talk or direction: hands to the work, no mystery, no second-guessing.

When it was first announced that classes would go online due to Covid-19, I admit I did not give a moment’s thought to the writing groups. I started overthinking everything, as is my wont, and there was no one around to check me. However, as the time approached for classes to begin after an extended Spring Break, I knew I had to convene a Friday writing session on Zoom. I was adrift and mourning the loss of the Friday writing group’s special place and special time, but if I didn’t do something, it was clear that there would be no hard stop to my week nor to my wandering mind, and I would no longer be able to distinguish between work weeks and weekends. I was more than a little put off by programming something “off-site,” when I attributed all the success of the venture to being “on-site” together. Surely it would not be the same. And I feared that no one would show up.

But show up they did! On Friday, March 20, at 9:45am EDT, my Zoom-weary eyes quickened at the sight of five other writing group members. The plan was to “gather” at 9:45 am, begin writing at 10:00 am, and then check in again at 10:50-11 and 11:50-12, ending the session at noon. We checked in, caught up on the basics of our situations, began to reorient ourselves back toward our writing projects, and set to our work promptly at 10:00! What a relief! Despite my misgivings about the modality, that old muscle memory, built up over years of writing in the same room with other people I trust, came back, and I was able to concentrate and power through some modest writing tasks. At our next check in, my fellow writers confirmed for me that the off-site experiment was the next best thing to being there and we declared it a step in the right direction.

Since that first Zoom “write off-site” experiment on March 20, we have continued to bookend our weeks with Monday and Friday writing groups. More than five weeks later, a goodly group of faculty writers continues to show up, we share what we’re working on and what’s hard, we look to each other for advice and inspiration, and most importantly, we write. And when we “assemble,” we honor our time, we know that each of us contributes in our own way, with as much focus as we can muster, pulling together, hands to the work. I still look forward to the writing groups, every single time. I can’t wait until we can gather back again in the Art Building, where this sense of community has been established over time. In the meantime, however, we are determined to keep on writing, apart, together.